Nepal is a beautiful country. It has so many unique things to offer. Nature has gifted her with time: unbelievable topography, climate, bio-diversity etc. Similarly, the people and culture of Nepal is truly the perfect amalgamation itself.

The latitudinal extension of Nepal is only 4º. And normally the climate in the same latitudes remains the same. But this rule doesn’t work in the case of Nepal. Nepal experiences various types of climates. It is an unbelievable fact that Nepal experience almost every type of climate found in the world.

The three geographical regions of Nepal have distinct climatic features according to their altitudinal positions. Though various types of climate are found in Nepal, there is a great influence of monsoon on it. The South-East Asian region experiences the monsoon type of climate.

If any Doubt: Trekking and Mountaineering: What’s the Difference?

The presence of the mountain at the north stands as the barrier to the cold wind that blows from the North and keeps most part warm. Similarly, the southern slope of the mountain traps the monsoon wind blowing from the Bay of Bengal and brings enough rainfall. Broadly speaking, we can divide the climate of Nepal as summer and winter condition.

The summer condition lasts almost for six months from March to August. During the first three months, the temperature rises and there is no rainfall. The general climate is hot and dry with general temperature ranging between 30º to 35º C in Terai region, 20º to 25º C in the Hilly Region and 0º to 10º C in the mountain region. During the last three months, the low pressure created over inner Asia draws the monsoon wind from the Bay of Bengal which brings enough rainfall.

The winter condition in Nepal roughly lasts for the six months from September to February. The general climate during this time is cold and dry. During the period, high pressure is created in the inner part of the continent which causes a dry wind blows outward. This outward blowing wind is usually very cold and dry and absorbs very little moisture. This only brings occasional rainfall. The winter temperature also varies according to the altitude. The general winter temperature of Terai region ranges between 10º C to 18º C, the hilly region has 0º C to 5º C and mountain region has below 0º C.

In terms of temperature, rainfall, precipitation, the direction of the wind, air pressure there are spring, summer, winter and autumn seasons in Nepal. Tourism in Nepal is a pre-monsoon or post-monsoon activity. That is to say spring and autumn are the best time to visit Nepal. March, April and May are spring season and September, October and November are the October months. To be precise, between October and December is the best time to visit Nepal.

During these months the skies are clearer, days are warm, and views are unobstructed. There is plenty of sunlight but the weather is not hot. The weather remains pleasant until April. January and February can be very cold. Late Spring is the most incredible time to travel because hills are decorated with the blossoms of beautiful rhododendron. From May it will be hotter until June when monsoon rains arrive.

You can also visit: Nepal Travel Guide: A Complete Guide to Visit Nepal

In this article, I am particularly highlighting what is the best time to visit Nepal. Let’s have a look at the minute description of Climate in Nepal during four different seasons.

Spring is a mild and lovely time to visit Nepal. March is the beginning of the spring season in Nepal. The temperature increases steadily. The temperature is about 22º C with occasional rainfall at night. Days are longer than usual in March and April. Though the days are warmer enough, nights are cooler than expected. This is the perfect time to visit in Nepal for mountaineering because hills and mountains are decorated by the blossoms of Rhododendron. May is one of the warmest months of the year but will bring cloud and showers before the monsoon arrives.

The monsoon season roughly lasts for the three months in Nepal. It begins in June and ends in August. The daytime temperature increases up to 30°C. The days are hot, wet and humid. It is a matter of surprise that most rainfall occurs during the night. This is all because of Nepal’s geographical position. The pristine morning scenery due to monsoon lures anyone. This period is the offseason for trekking in Nepal. Clouds and fog obscure the panoramic views and muddy trails make it unpleasant. However, this is a perfect time for sightseeing around the cities. 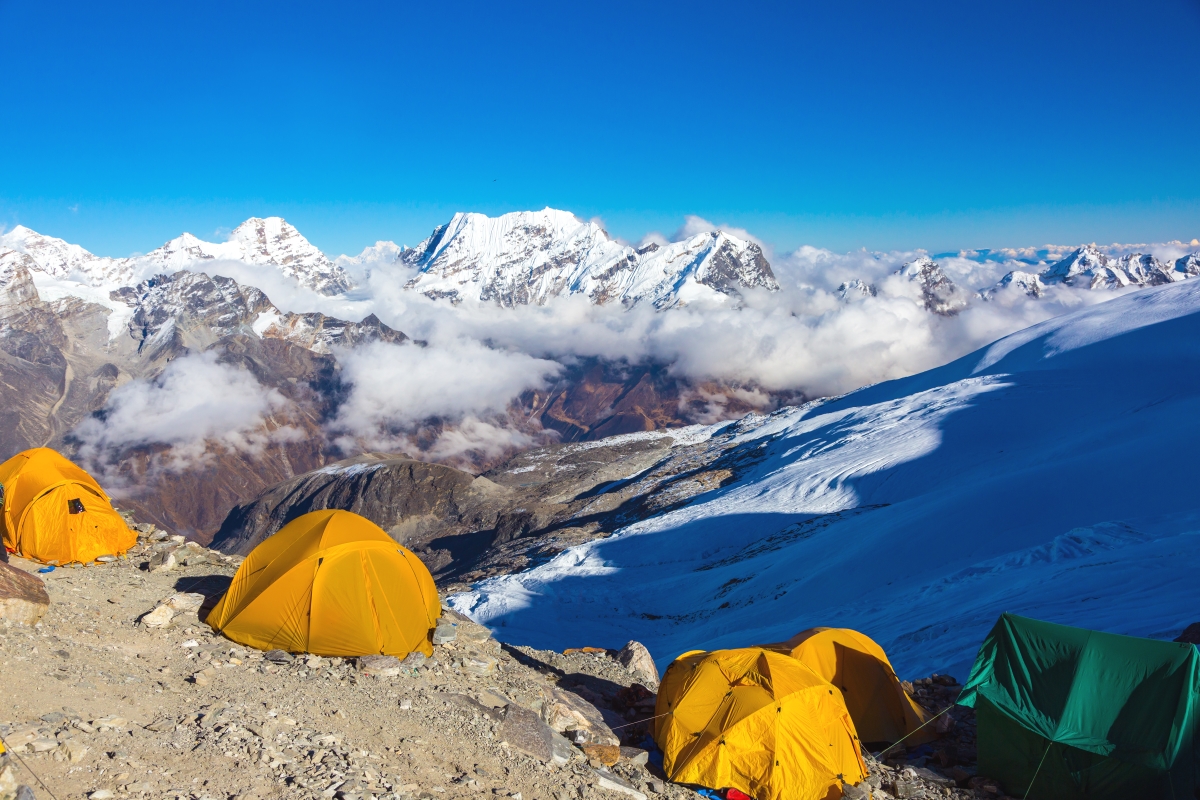 The autumn temperature ranges between 10º C to 15º C. The beginning of the autumn welcomes beautiful clear skies, fresh air and incredible views. October and November are two of the best months to visit as dry days make trekking easier and offer good visibility. The verdant landscapes following the rains are ideal for photographers. This is an ideal time to visit Nepal because two of the major festivals of Nepal: Dashain and Tihar are celebrated during this season.

Know More: Why Nepal is Best Country for Mountaineering?

The winter season lasts from December to February. The weather is pleasant during the day but it is significantly cooler during the night. The temperature falls below 0º C. The weather is very cold in the mountains. January is the coldest month. Very few tourists visit Nepal during this time. However, there are sufficient places for trekking and hiking even in the offseason.