Do you know where is Mount Everest Located?

The Mountains are the most wonderful gift of Nature. They attract more than any other beautiful things on the Earth. The White Mountains, glistening against the sky are the most enchanting things that our eyes pursue. There are many prestigious peaks in the world. Among them, Mount Everest is the one which attracts the attention of anyone who hears about this. This article is about the same peak aforementioned.  I hope you will enjoy reading the location of Mount Everest, difficulty, height, best seasons to climb, history, amazing facts, tips for climbing and many more.

How the Word Himalayas is derived?

The word Himalaya is taken from Sanskrit which means Adobe of the Snow. The word Hima’   means Snow and ā-laya means receptacle, dwelling. The Himalayas is the greatest/ tallest mountain range in the world. It is renowned all over the world because it has most of the world’s highest mountains. Most of these mountains are above 8000m high. Some of the notable mountains of the Himalayas are Mount Everest, Kanchenjunga, Makalu, Lhotse, Cho Oyu, Annapurna, Dhaulagiri etc.

The Himalayas is a huge mountain range that separates Tibetan Plateau from the Indian sub-continental plains. In fact, it is the natural border between Nepal and China. The International border runs across the summit ridge. The Himalayas stretches from China in the east to Pakistan in the west, across Bhutan, Tibet, Nepal, and north-east India. The Himalayas runs about 2400km in an arc. 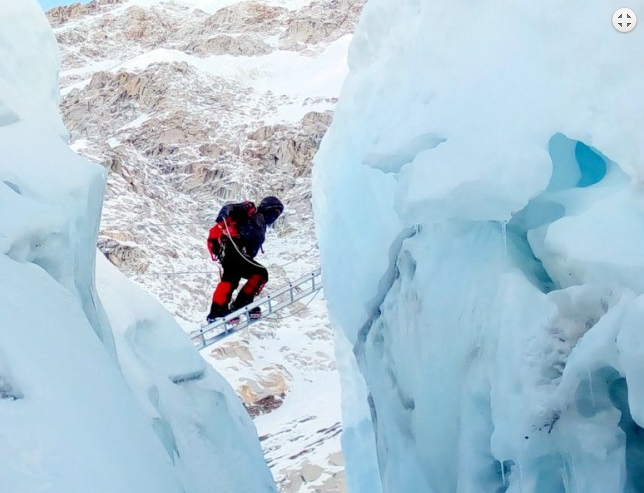 Mount Everest is a prominent peak of the great Himalayas. It is the highest peak in the world. The History of Mount Everest has been started only in 1852. Unless then, it wasn’t identified as the tallest mountain of the world. The credit for this goes to Sir George Everest of Governmental Survey of India. He was the British Surveyor General of India from 1830 to 1843 and he carried out the first extensive exploration of this massive peak. Therefore, the peak was named as Mount Everest by Royal Geographical Society in 1865 for his honour. Before that, the peak was popularly known as Peak XV.

Different Names of the Mount Everest

Mount Everest is known by different names in different places. It is called Sagarmatha in Sanskrit and Nepali. Sagarmatha morphologically stands for “Peak of heaven”. It is called Chomolungma in the Tibetan language which means “Goddess Mother of the World” or “Goddess of the Valley”. Whatever is its name, it is the tallest point on the earth. It is a natural wonder that leaves anyone in awe. This mountain peak has also been described as the Third Pole by Michael Karge.

If you want the political location of Mount Everest, it is located in Solukhumbu District of Province No. 1 in Nepal and Tingri Country, Xigaze, Tibet Autonomous Region of China.

Another survey by Italy in 1987 recommended its height to be 8,872m and in 1992 the Italian Survey came with another surprising result that was 8,846m. In 1999, a survey led by America claimed its height to be 8,850m. And the latest Survey by China in 2005 claims its height to be 8,844m. Though there is eternal debate regarding its height, most people agree with 8,848m. It is believed that Everest is growing every year by 4mm due to shifting tectonic plates.

Mount Everest is the tallest mountain peak of the world. It is the dream of anyone to scale this peak. However, one in thousands only can successfully accomplish this adventure. Climbing Mount Everest is not impossible. You need to have enough preparation and mountaineering training as well as sturdy physical and mental conditions.

Mount Everest Expedition is a technically demanding and numerous danger involved peak climbing. The weather changes all of a sudden. Huge Crevasses, glaciers and icefalls may challenge you the more you approach the summit. Ascending to the top of the world is an arduous and potentially deadly undertaking due to the extreme altitude, avalanches, icefalls, and other hazards. The ascent above Camp -4 is really challenging that it is referred to as the death zone.

Altitude Sickness is the most common challenge in such heights. Everest’s summit has nearly one-third the air pressure that exists at sea level, which significantly reduces a climber’s ability to breathe in enough oxygen. Mount Everest Expedition is also difficult because it is too lengthy. The death ratio is also comparatively higher than its subordinating mountain peaks. However, with adequate preparation and suitable gears, this mountain peak is conquerable.

Trekking and climbing Mount Everest is not possible all the year-round. It is only available in a short period of April to Mid May and September to October. The harsh climate in winter and deadly monsoon in summer make it extremely difficult and dangerous to climb Mount Everest.  Therefore, Spring and Autumn are the best seasons to climb Mount Everest. During spring and autumn seasons, the average temperatures vary between 15º C to 25º C. The snowstorm is also calm in these months.

Moreover, these two seasons are characterized by plenty of sunshine, clear weather and a blue sky. These two seasons are the ideal seasons for breathtaking views at the Everest region. Even at the Mount Everest Base Camp, the temperature at night is below 0º C all the year-round. The temperature at the Everest varies significantly even within a single day. Though the temperature rises up to 10º C during the day time, it drops far below 0º C during the night. Thus, spring and autumn are the best seasons for climbing Mount Everest. For other information regarding the weather condition at Everest, please our website.

Mount Everest is undoubtedly the best mountain peak. The tallest mountain of the world offers the most beautiful landscapes on the earth. For good reasons, you will be at the top of the world and witness the heaven on the earth. The most significant part of any tour in the Everest Region is the people and culture. On that note, Mount Everest is the most persuaded dream of the people. But it is really very challenging one. You need to be physically and mentally fit. You need to escort the preparations with full sincerity. You need to engage yourself in back to back day hiking at high altitude.

How To Train For Climbing Mt Everest

Why is Annapurna so deadly?