How Low Can The Temperature Get On Mt. Everest? : Mount Everest might be a dream of many trekkers but it takes some nerves and forbearance to ascend the summit. They’ll need a lot of physical strength to pull off the trail full of seracs, deep crevasse, and stiff icefall. The extreme weather is, indeed, another setback that challenges mountaineers to the core.

Even pro climbers go frantic before the dropping temperature of Mt. Everest that can be as low as minus 42 Degree Celsius. This was the lowest temperature ever recorded at the summit as things like this don’t happen so often.

Climbers will have to get along with the sub-zero temperature all round the year so better prepare yourself for extreme weather. There are plenty of ways to improve stamina and minimize the severe effects of cold including hypoxemia.

Altitude sickness in winter can be fatal, causing hypoxemia, skin reddening, and even pneumonia. It’s for that reason trekkers on Everest spend days and months acclimatizing and strengthening their vitality. Proper rest helps prevent the shortness of breath on high altitude insofar death zones.

Just to adjust with the falling temperature, climbers ascend the trail gently during the day and climb down to and fro. Warm fleece alongside insulated boots will keep you warm in the zone and help prevent the damage. If you’re still heedless of how low can the temperature gets on Mt. Everest then keeps scrolling. 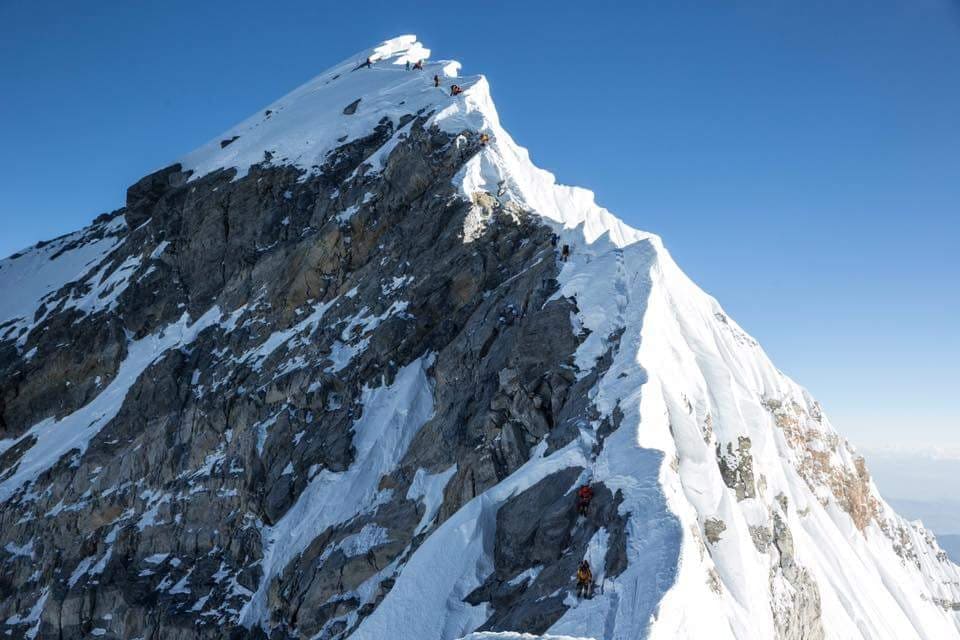 After Base Camp, every climb making headway to Mount Everest is wicked and spine-chilling. The threats are innumerable with a deep chasm, thin ice sheet, and cirques ambushing the trek. Hence, mountaineers won’t be able to climb the summit unless it’s the right time.Most trekkers attempt to climb the world’s highest peak in May because of the lovely weather. And from mid-May, temperatures gradually rise while the jet streams flowing high overhead are completely gone from the mountains.

Everest receives no rain and snowfall in the month, given the mix of spring and summer. Unlike monsoon, the tracks are relatively dry in May, preventing slips and falls. Climbers have a better chance to reach the mountain in May due to improved weather conditions.

As a consequence, a record number of crowds finish at the peak in May after waiting a whole winter. Following the craze of climbing Everest in the month, the world is witnessing a traffic jam in the death zone.

People are suffering from pulmonary edema due to standing too long on the trail above 8000 meters. Thus, people must not roll up together and wait patiently until reaching the summit. However, the mountaineers also need to be careful from the open cracks and snowslide.

The warmer temperature can cause avalanches and put the life of trekkers in risk so they must scramble the mountain in the dawn. It will help them prevent the threat and scramble up the peak successfully.

How difficult is Mt. Everest Trek? 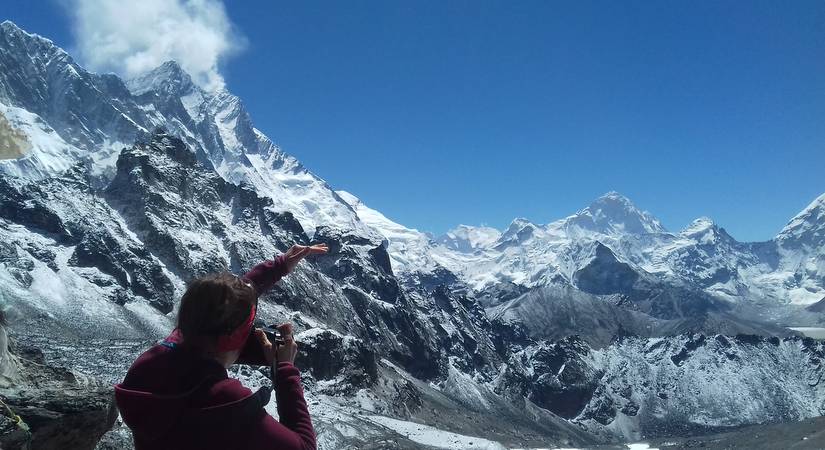 As the world’s highest mountain, Everest soars up to 29,028 feet high with steep glaciers and rocks. It’s not at all easy to climb the peak, especially in winter when the average temperature drops below -19 Degree Celsius.The section with the steep icefall, towering seracs and rift is incessant and most difficult to overcome. The temperature of -17 Degree Celsius is as warm as it gets at Mount Everest during winter.

The weather at the summit is quite brutal throughout the year but in the spring season, it gets a little better. Following clear sky and sunshine, mountaineers will have an easier time scrambling the trails.

However, to escape the movement of the glaciers resulting from the midday heat, they start walking the trail before sunrise. Altitude sickness is another hindrance to outlive by mountaineers on Mount Everest trek.

Standing at an elevation of 8,848 meters, Everest has low atmospheric pressure. The area above 8000 meters is considered as a death zone and it’s pretty toxic. The instant exposure to such altitude can prove to be fatal. It’s therefore trekkers carry supplemental oxygen to improve the low blood pressure and prevent shortness of breath.

What factors contribute to the low temperature of Mt. Everest? 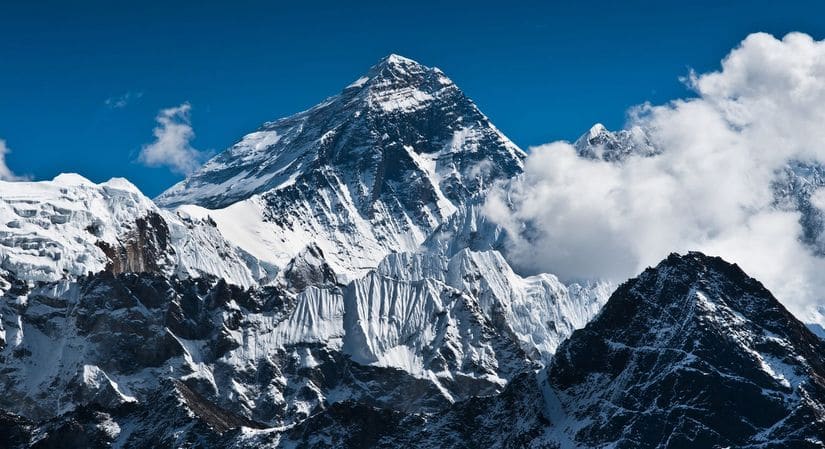 It’s no secret that Mount Everest encounters the lowest temperature than anywhere in the world. The minimum temperature can fall up to -36 Degree Celsius causing the zone to be severely cold. Weirdly, the temperature in summer is also measured below -19 Degree Celsius which is still freezing.That’s the reason why mountaineers carry high insulated clothes while climbing Everest even in summer. This raises the question of what causes the temperature to be so low at Everest.

Well, there are various factors that contribute to the lowest temperature of Mt. Everest but mostly it’s the altitude and season. Starting from the base camp at 5,360 meters, Everest mounts all the way up to 29,028 feet above sea level where the level of oxygen is extremely low.

Climbers do use bottled oxygen to inhale but it only lasts five hours so they have to be super quick while ascending the death zone. Stranding in the death zone for too long can cause heart stroke and cerebral edema.

Season also contributes to the change in temperature of Mt. Everest. In winter, the temperature at Everest plunges by -17 Degree Celsius more than that of summer. Therefore, most mountaineers don’t scale the mountain during winter and hold the trip for spring or autumn.

Most trekkers hoping to reach the summit Mount Everest in spring because of the warm weather and tranquility. As the jet streams float to the north in March and April, there is calmness in the mountain in May.

The beauty of climbing Mount Everest in spring is that the hikers can ascend the peak even in the windstorm blowing at a speed of 35mph. Many trekkers can’t withstand such extreme temperatures and call off the excursion right there and then.

Your position at the mountain while trekking also determines the temperature. If you haven’t gone too far from the base camp then the temperature is anywhere between 12 and 20 Degree Celsius in March.

It reduces steadily in winter reaching below -17 Degree Celsius. As you head towards the mountain via Khumbu glacier, the temperature sinks promptly. Its effect can be seen immediately as the weather gets icy-cold.

In fact, when the Siberian air streams over Tibetan Plateau, the temperature can see a fall up to -60 Degree Celsius. The wind stays relatively quiet in summer, making it easy to navigate the trail through the steep-sided gully and at the head of a valley and Lhotse face. 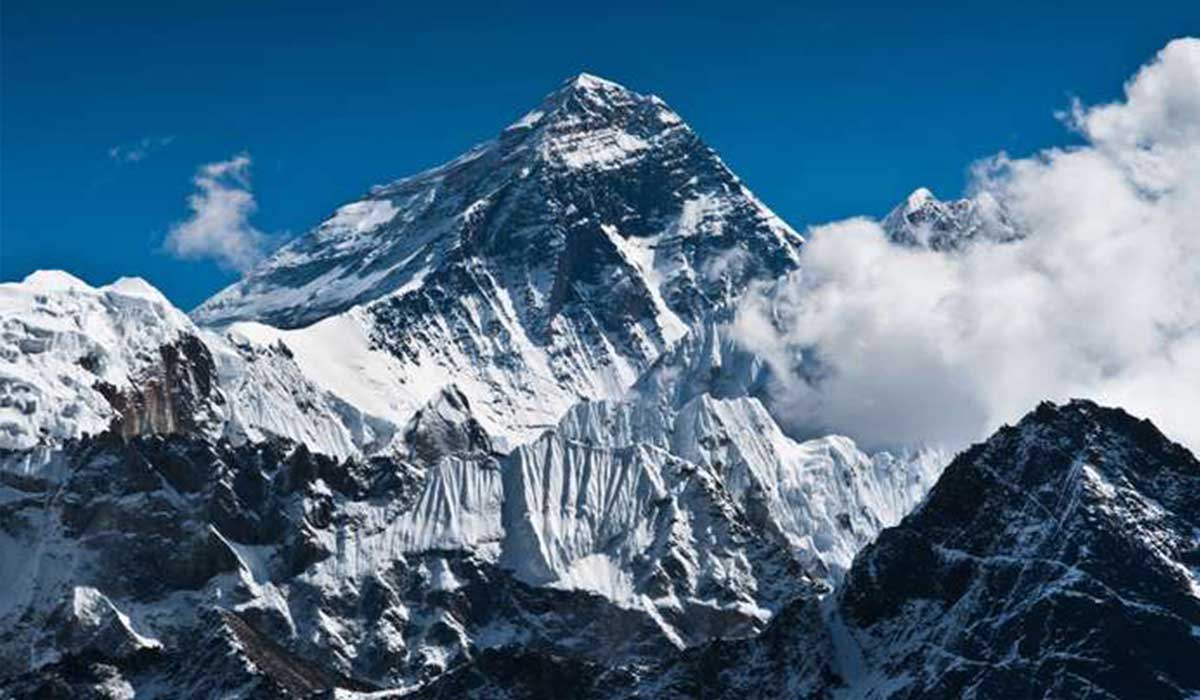 Little does it amaze us to know that January has the coldest weather on Everest with an average low-temperature between 8-12 Degree Centigrade. Winter is in full swing during the month, causing the temperature to sink rapidly.

Everest weather in January elapses with foggy mountain mornings and crisp days. Nights are cold sweat down the peak with the temperature dropping on a large scale. Wind chill and tropical storms make the peak inhospitable during winter.

It’s characterized by low precipitation, excessive winter storms, ice pellets, and heavy snowfall. As the trail goes high up from base camp, the temperature drops significantly, sometimes reaching even below -36 Degree Celsius.

The shifting jet streams from the northern hemisphere to the south ignites high wind and snowfall. Catastrophic hurricanes of 285mph speed can be recorded on Mt. Everest. But, more often the speed of the wind is 160 km/h which can still create a lot of damage. They are strong enough to push back mountaineers and block them from getting on the summit.

What different temperatures will mountaineer experience on Mount Everest? 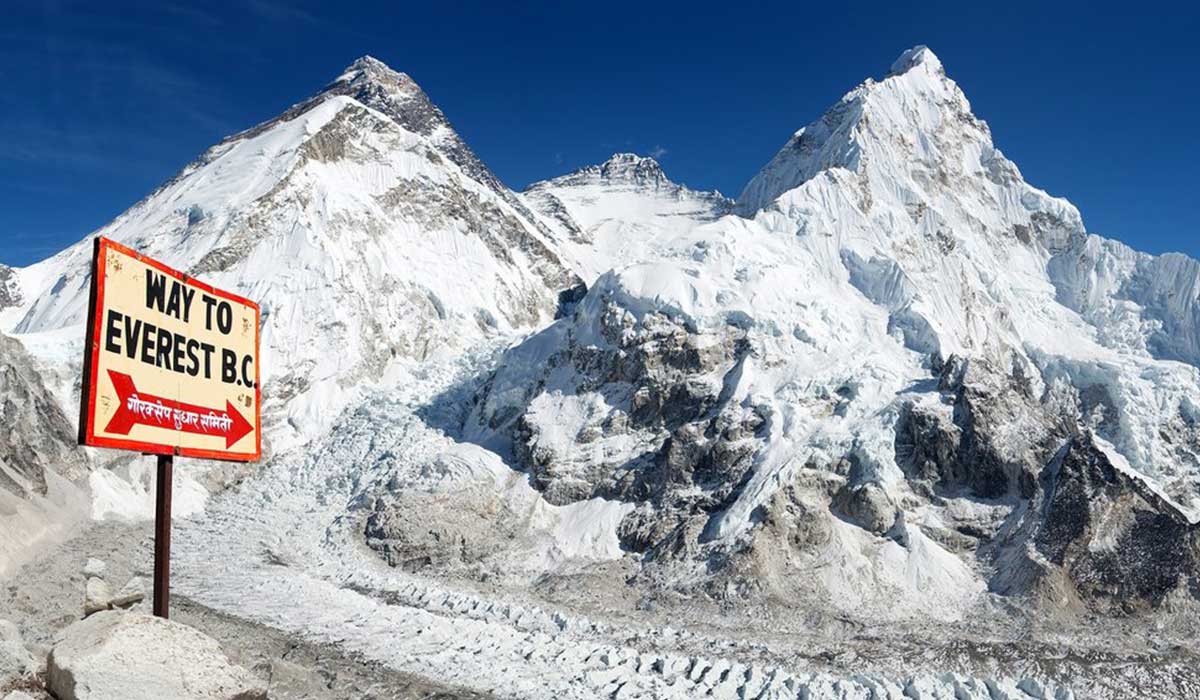 The unforeseeable weather of Mount Everest is undeniably the prime concern of mountaineers. It gives a tough time to mountaineers and even shakes their confidence, forcing them to leave the mountain over and again.

Even the so-called warmest day of the year counts a temperature below 0 Degree Celsius on the trail heading to the summit. Although it’s stone-cold on Mt. Everest throughout the year, the winter of all seasons has the nastiest weather.

It kinda goes without saying that Autumn weather is the best of all seasons for climbing Mt. Everest. Though it’s frosty on the top at night, most days are warm and sunny with no snowfall. The temperature starts to fall steadily from mid-September but not as much as you’d wish.

It’s still quite colder on the trail than Base Camp with thick ice sheets and glaciers all around. Autumn stands strong wind blow with short days, making the ascent ridiculously difficult. You’ll get a temperature of below freezing point but not as much as in the winter. The weather is pretty stable for at least 2 months before winter finds its way to get in.

Spring is a prime season for trekking Everest as it embraces lovely weather. Unlike monsoon, the temperature is mild in spring due to which mountaineers can easily resist the cold. Starting from March, the temperature rises slowly although it’s still below the freezing point.

April and May see the wind blowing at a speed of 50mph from the west against the mountain. This eventually results in low atmospheric pressure and a reduction in supplement oxygen to mountaineers. The weather is slightly cold and dry in Spring, drawing moisture-laden air which occasionally triggers storms.

Winter in Nepal starts from late December till February, stirring hail storms and extreme cold climate. Its effect can be seen on a mass scale at Everest where the temperature drops up to -36 Degree Celsius.

The nail-biting cold out there is something no climber can withstand, be alone scrambling the trails up to the summit. Besides, they also have an avalanche to prevail over that keeps ticking clock. Flights often get delayed if not canceled due to wild storms and snowfall in winter.

Summer-Monsoon weather is pretty much induced by Indian Monsoon which causes humid climate with frequent rainfall. Mountaineers will at times get a wind gusting at a speed of 100km/h to combat.

Given the sudden rise in temperature, slides and rockfalls are common in summer. The increase of moist wind from the sea surface to the stratosphere results in high precipitation. It also takes off the moisture from the air, causing skin itching, irritates sinuses, sore throats, and flaking.

The temperature on Mt. Everest during summer is extremely low as compared to that of Base Camp which ranges from 20 to 25 Degree Celsius. The humidity in the air decreases with every increased altitude, creating the possibility of rain.

But note that, the weather is still cold at the mountain in summer with the temperature below 0 Degree Celsius. As it happens, the lovely sunny day on Everest also has a temperature of -3 Degree Celsius with low air pressure. At the top of the summit, it drops up to -19 Degree Celsius in July.