Nepal is a popular destination for trekking and climbing mountain peaks. For centuries many climbers have visited this country to climb its peaks and trek in the exotic routes. Most of these climbing peaks are situated in the Everest Region.

Everest Region is home to the world’s highest mountain Mount Everest. It also hosts many popular trekking and climbing peak destinations. Such as Everest Base Camp Trek, Island Peak Climbing, and many more.

Among these, Lobuche Peak is also one of the popular climbing peak destinations in Nepal. This climbing peak is an extension of the Everest Base Camp Trek.

Are you thinking of climbing Lobuche Peak? Are you wondering what difficulties can you face during your climb? Then our article on “Lobuche peak Difficulty” can give some insight on them.

Lobuche Peak Climbing is technically more challenging than the Island Peak Climbing. It gives a very authentic mountain climbing experience to the mountaineers.

You will be walking through beautiful forest paths and visit many Sherpa settlements on this trip. You also get to visit a few ancient monasteries situated on these trails.

Reaching the summit will be an overwhelming excitement for climbers. As you get to see the panoramic view of the Everest region. Along with various mountain peaks such as Mt. Everest, Lhotse, Makalu, Ama Dablam, and many more.

On this climb, you will be visiting Lobuche village which is the gateway to Lobuche peak Climb. From there ascending the trails you head towards your destination. Along the way, you will rest in various villages and stops.

One of the hardest parts of this trip is climbing a 45-degree snow wall which is 50 m high. You will be using technical gear to make the climb.

You can complete this climb with proper knowledge of techniques and good health conditions. To know more about Lobuche peak difficulty you can read further below.

Lobuche Peak is a marvelous mountain situated in the Solukhumbu district of Nepal. This mountain has two major peaks Lobuche East and Lobuche West. Climbers prefer Lobuche East for climbing peaks as the south ridge route is easier to make the climb.

You will be requiring an entry permit from the National Mountaineering Association to make the climb. The NMA has classified Lobuche East as Trekking Peak and Lobuche West as Expedition peak.

Being a trekking peak it is grade as Moderate level climb. You will be making many uphill and downhill climbs on this trek. Climbing the Lobuche peak is suitable for any level of people. 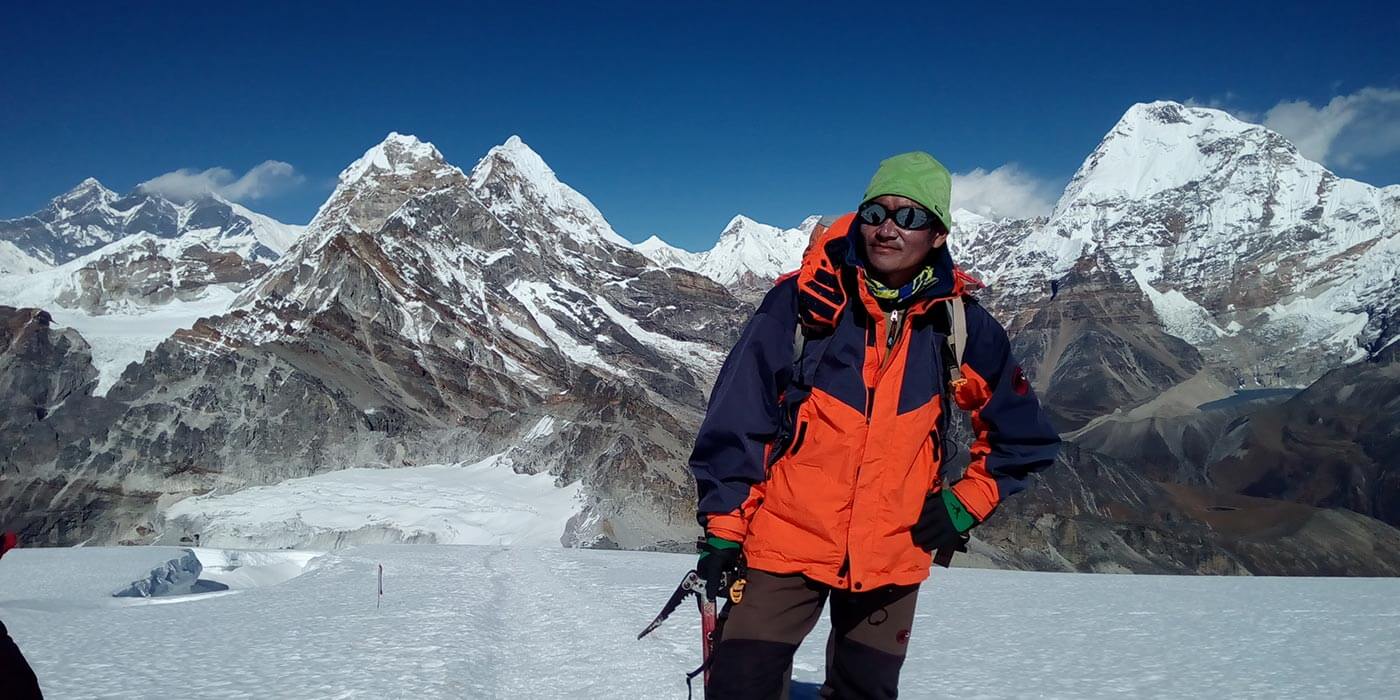 Winter and Monsoon seasons are also suitable but there are various obstacles you have to face during this time. We have given a brief explanation of each weather below:

Autumn Season is the peak season for visiting Lobuche peak. The weather and temperature are at its best during this season. It is neither too hot nor too cold. Also, the skies are clear giving the marvelous view of your surroundings.

The months of September, October, and November fall in this season. These months are the best time to visit Lobuche Peak. You can see the colorful flowers cover the forest paths with its beauty. Also, the mountain peaks look astounding from between the trees.

Spring Season is one of the crowded seasons of the year. The paths are filled with travelers from all around the world. This is the season when the beauty of nature is at its best.

The hills gain back it lost greeny while the forest path is covered with buds of flowers ready to bloom. A perfect season for the nature lovers to visit Lobuche Peak. The weather and temperature are also at it’s best during this season.

The months of March, April, and May fall under this season. The skies are crystal clear during these months. Also, the days are sunny making your walk quite comfortable.

Winter Season is the off-season time to visit Lobuche Peak. This is the season when snowfall occurs in high elevation. Winter is the coldest time of the year. Traveling at high altitude is filled with challenges.

The months of December, January, and February fall in this season. These are the months when the routes are peaceful. The skies are also clear during this season.

But the temperature falls below the freezing point as you climb high in elevation. So, if you can handle the cold then the winter season is also a great time to visit Lobuche Peak.

Flights are usually delayed or canceled during this season. However, there are few chances of rainfall in high altitudes. So, if you are planning your visit during these months then add extra days in it.

The months of June, July, and August fall in this season. These are the months when unique species of plants and flowers are seen in the forests. Most people visiting during this season are researchers or Botanists. 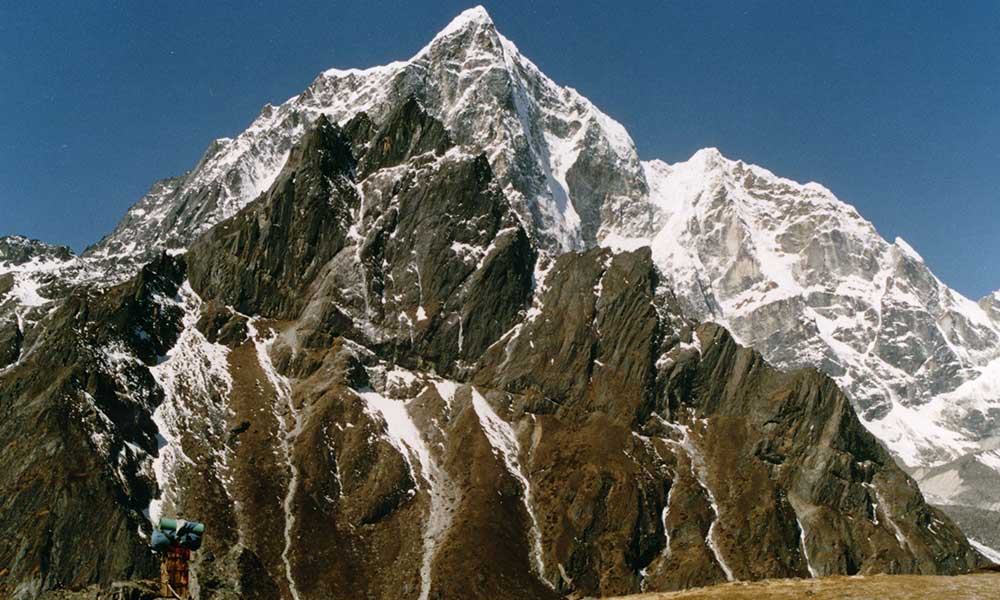 Altitude Sickness is a common difficulty faced when traveling to higher places. You will be reaching an altitude above 5000 m on this trip. So suffering from altitude sickness is natural.

Acute Mountain Sickness is another name for this. The air is thin in the upper region due to which the oxygen level is also low. Causing altitude sickness for travelers.

Some common symptoms often seen are Headache, Dizziness, lack of sleep, etc. If you notice any of the symptoms inform your guide immediately. They will advise you on what you should do next. If proper medication is not taken in time it can risk one’s health.

The route of Lobuche Peak has been graded as Moderate level climb. The trails can be harsh for newcomers with zero experience. While the professionals might find it less harsh and challenging.

Lobuche Peak route has many uphill and downhill walks you have to make for this trip. Not only that but you will also be walking for about 5 to 6 hours each day. So continuous walking can be tiring for the novice climber.

Also, the paths are off beaten in some parts of this trek. So be careful while walking these trails. You also need to have knowledge of how to use a few of the technical gears. Completing this trek properly requires a huge amount of stamina.

Finding proper accommodation is a difficult task when going to high altitudes. The upper areas of the Himalaya regions are still not fully developed. So, there are not many establishments in hotels and shops.

As you climb higher in the paths you can notice the no. of lodges reducing. Thus if you are traveling during crowded months then finding a room of your choice can be hard.

You might have to share your room with a fellow companion. Not only room, but you have to wait in long queues to use bathrooms as well. There are no private toilets in high areas. 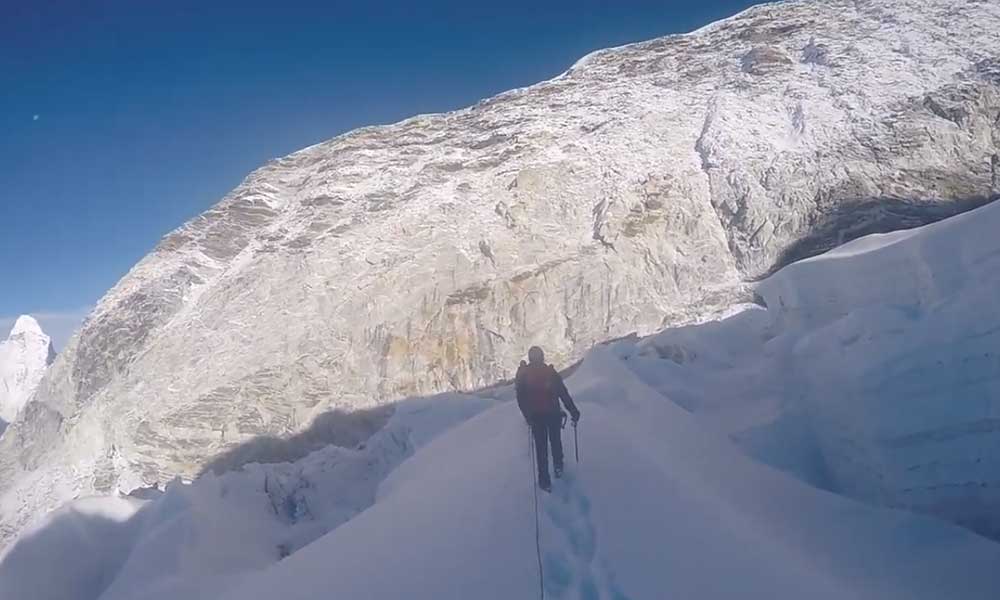 But the weather during winter and monsoon seasons is not very favorable. Due to heavy rainfall in monsoon the paths are muddy and slippery. Also, the beautiful views are hidden behind the dark rain clouds.

As for winter, it is very cold during the early morning and nights. Some might find it hard to cope in that weather. So the packing of warm clothes is essential for this season.

Also due to snowfall, the paths are covered in snow making the walk challenging and thrilling.

The temperature tends to fluctuate in the high Himalayas. Early mornings and nights are usually cold and chilly even during warm months. So, light sweaters should be packed no matter which season you pick.

The higher you climb the more temperature tends to drop.

This may be a trekking peak but still, there are various difficulties that can occur during your visit. So, always be well prepared.